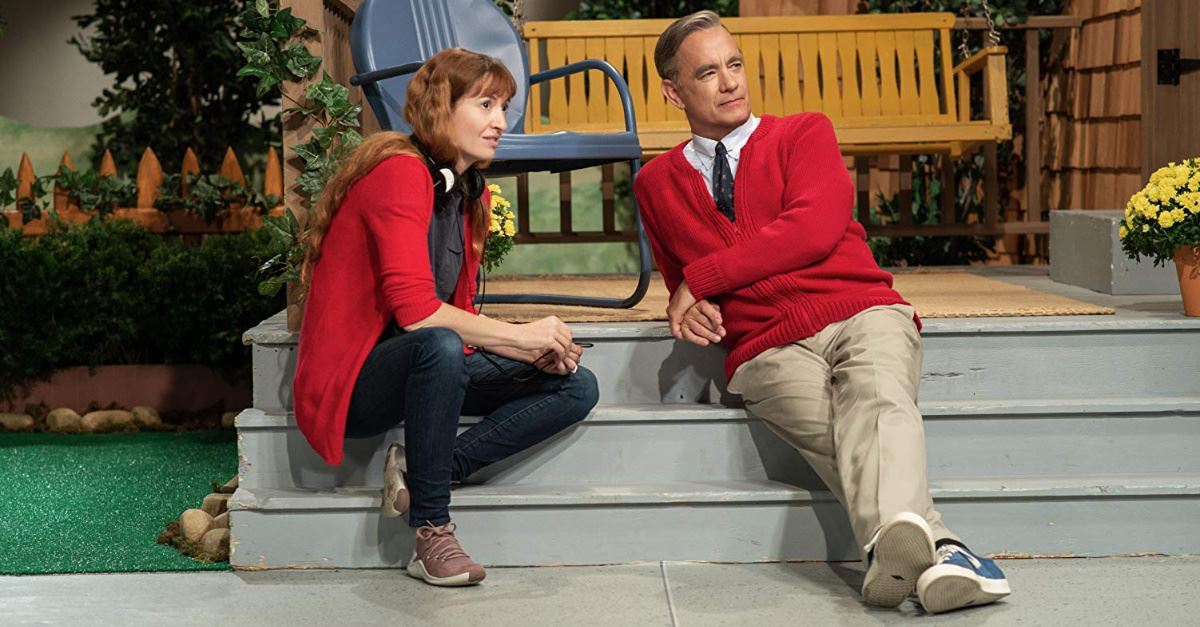 Tom Hanks nails the performance of Mister Rogers – from the gentle mannerisms, to the soft-spoken cadence, to the unforgettable changing of the shoes. It is an Oscar-worthy performance. Rhys is impressive, as is Watson.

The film perfectly recreates the look and feel of the Mister Rogers’ Neighborhood set. Mr. McFeely makes an appearance. Picture Picture does, too.

The movie also weaves in elements from the show throughout the film. For example, instead of showing us the real skyline of Pittsburgh, where Mister Rogers lived and worked, the film shows us a Pittsburgh-like skyline recreated from toys. Toy cars crawl across the toy bridge. We see Rogers comment, as if speaking to the camera on television, about Vogel’s problems in life. We also learn about how magazines are made – just like the series would have done.

A Beautiful Day in the Neighborhood isn’t a biopic of Fred Rogers, even though it contains plenty of Mister Rogers moments. Instead, the story carries us on a journey as we discover how one man, Lloyd Vogel, was changed by meeting Rogers. Vogel was harboring feelings of hatred toward his father, but Rogers teaches him how to forgive.

It’s not unlike the way millions of children were impacted by “meeting” Rogers each day through the wonder of television. The movie forces us to ask: Why aren’t we kinder and more compassionate with friends, neighbors and strangers? Why do we get distracted, so easily, by worldly things? And why aren’t we the same person in private as we are in public?

The film portrays Mister Rogers as someone who always had time to do a kind deed. When a Make-a-Wish Foundation child appears on set, before taping, Rogers gives them prolonged one-on-one attention – as the crew stands around and waits for the visit to end. When he and Vogel sit together in a restaurant, Rogers listens intently to his companion – instead of looking around as so many of us would do.

“His focus was always on the individual with whom he was speaking. He was never distracted,” Bill Isler, the former president & CEO of The Fred Rogers Company, told Crosswalk.

The Mister Rogers we saw on TV was the same person his friends knew behind the camera, Isler said.

The Lloyd Vogel character is based on the life of a real-life journalist, Tom Junod.

“I think that you expect everybody to be a different person behind the camera than they are in front of the camera,” Junod told Crosswalk. “Fred was definitely one of those people who was not.” 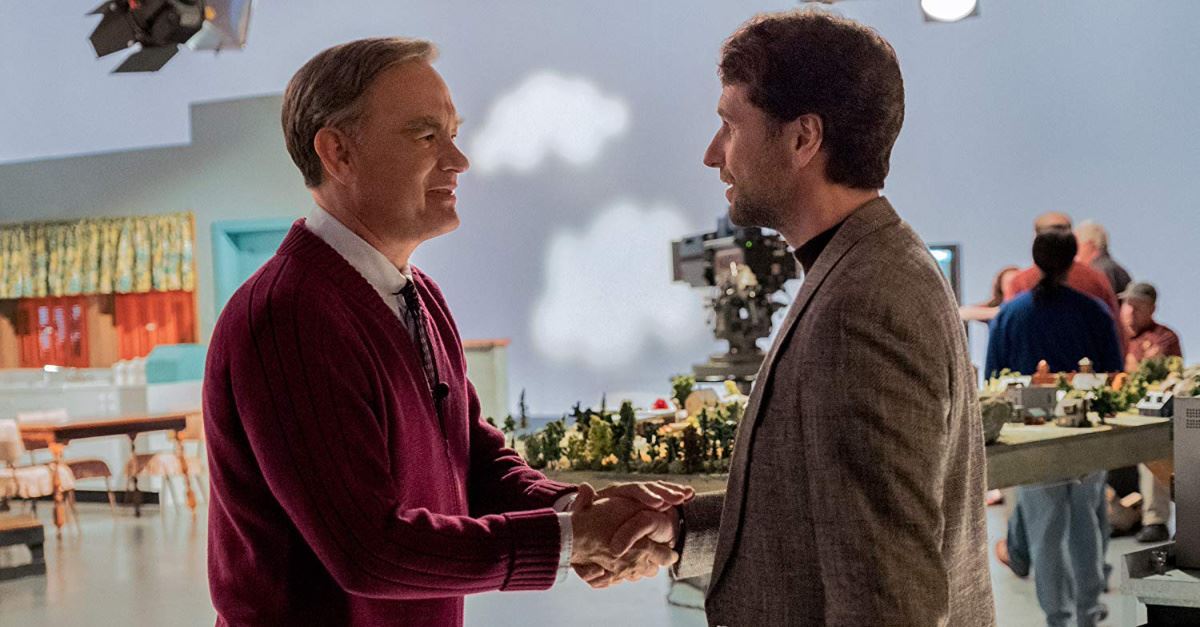 Politicians often debate the solutions to society’s problems. Perhaps some of the answers rest in the New Testament’s Fruit of the Spirit – love, joy, peace, patience, kindness, goodness, faithfulness, gentleness and self-control.

A Beautiful Day in the Neighborhood shows the power of kindness and compassion. It demonstrates what can happen when one person invests in the life of another person. Despite Vogel’s reputation as a hard-nosed journalist, Rogers agrees to the interview. And thanks to Mister Rogers, Vogel changes for the better.

The movie teaches us about forgiveness and reconciliation, and the importance of fathers and families.

The plot changes a few things about Junod’s story – in real life, he had a good relationship with his father -- but it correctly mirrors Junod’s desire to be kinder and gentler than his dad was.

Junod enjoyed the movie. The father angle, he said, “struck me for its emotional truth, rather than its factual adherence.” 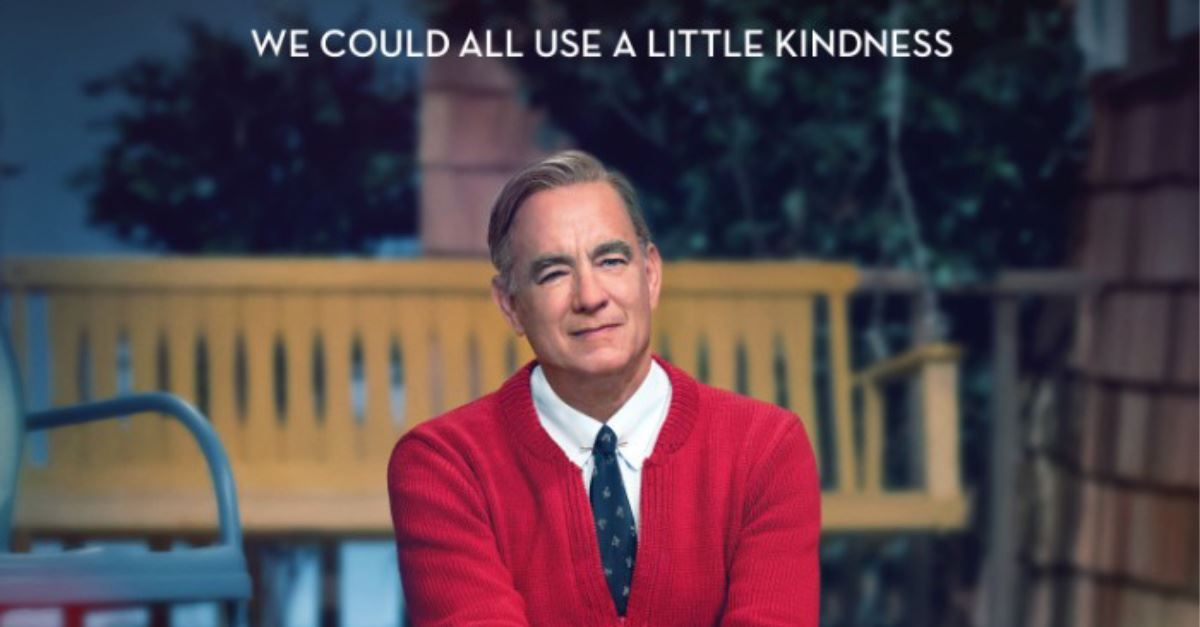 Just in time for Thanksgiving and Christmas, our can’t-agree-on-anything culture gets a Tom Hanks movie about … kindness.

And even though it’s based on a true story, Fred Rogers’ wife says it has a lot of symbolism.

“This is a parable,” she told Crosswalk, referencing the word’s Webster definition: a short story that illustrates a moral principle.

Her husband practiced kindness and wanted “others to do likewise,” she said.

It’s a lesson all of us could learn. 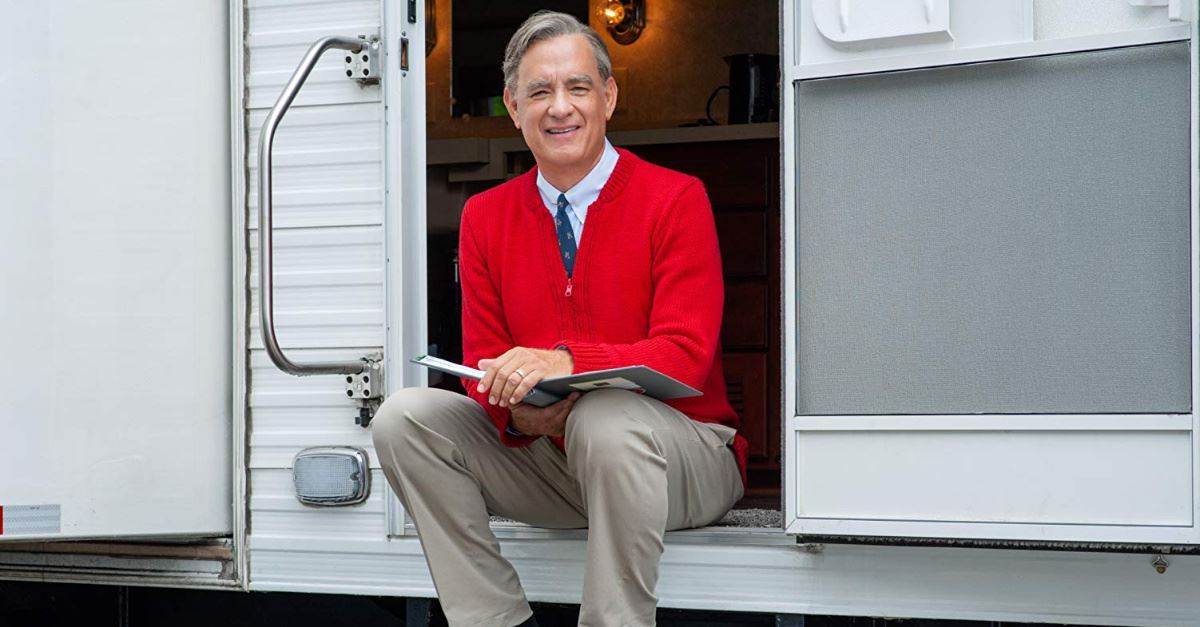 A Beautiful Day in the Neighborhood isn’t a faith-based like War Room, Overcomer or I Can Only Imagine. Rogers’ faith is mentioned, but it’s not the core of the plot. The film also has minor language (details below).

Still, the film makes clear that Mister Rogers practiced the Fruit of the Spirit because his faith propelled him to do so. We see him kneeling at his bed, praying for individuals by name (Vogel among them). We hear his wife mentioning how he reads Scripture.

In real life, Fred Rogers was an ordained Presbyterian minister.

His belief in Christ, she added, played a “very strong” role in his beliefs about kindness and forgiveness.

“His faith was exceedingly strong.”

A Beautiful Day in the Neighborhood is rated PG for some strong thematic material, a brief fight, and some mild language. Content warnings: Language includes h-- (4), OMG (2) and d--n (1). (None of it is spoken by Fred Rogers.) We hear a reference to a character “sleeping around.” Two men fight at a wedding.

Entertainment rating: 5 out of 5 stars.

Family-friendly rating: 4 out of 5 stars.

Michael Foust is a freelance writer. Visit his blog, MichaelFoust.com.

This content first appeared on Crosswalk.com and is used here with permission. To view the original visit: https://www.crosswalk.com/culture/features/things-you-should-know-about-a-beautiful-day-in-the-neighborhood.html