From the first chapters of Genesis to the closing verses of Revelation, angels play an important role in Scripture and are active throughout the story of God’s people. Angels are powerful, fascinating, and appear in many different ways and in many different situations. We are likely familiar with many of the angels that appear in Scripture: the angel who guarded Eden, the angel Gabriel who announced the birth of Christ, the archangel Michael, and many others. So, who exactly are these unique beings, and what role do they play in our world today?

What Is an Angel?

Angels are beings created by God who not only share his messages, but also actively do his will, encourage believers, and fight spiritual battles on our behalf. The word angel comes from a Greek word that literally means “messenger,” and angels are often seen bringing messages from God to us.

In spite of what we may have seen in cartoons and movies, angels are not people who have died, now sitting on clouds playing harps and waiting to earn their wings. This can make for a great storyline, but it is simply not accurate. Angels are created beings, made for God’s service and different from human beings. Hebrews 1:14 gives us this relationship between humans and angels, “Are not all angels ministering spirits sent to serve those who will inherit salvation?”

Jesus tells us in Matthew 22:30 that in heaven we will become more like angels in certain respects, saying, “at the resurrection people will neither marry nor be given in marriage; they will be like the angels in heaven.” This doesn’t mean that we actually become angels, but that we will be free from the things of earth and be able to see and enjoy our Father in the same way that angels do. Angels are eternally singing the praises of God, and we will also worship him forever in the same way.

Scripture doesn’t give any precise descriptions of what angels look like, and they often appear in different forms. We do have clues though, that however they appear they are amazing to behold. Some angels in Scripture appear as normal men, and we are warned that we could interact with angels without even knowing. In fact, Hebrews 13:2 gives us this instruction, “Do not forget to show hospitality to strangers, for by so doing some people have shown hospitality to angels without knowing it.”

In some situations, angels appear in the form of normal men. This is seen in angelic appearances to Abraham, Gideon and Lot, in Genesis 19.

In other situations, they are powerful and frightening. Even though angels can be intimidating in appearance, we are not to worship angels, but God alone. One example is found in Revelation 19:9-10, “Then the angel said to me, ‘Write this: Blessed are those who are invited to the wedding supper of the Lamb!’ And he added, ‘These are the true words of God.’ At this I fell at his feet to worship him. But he said to me, “Don’t do that! I am a fellow servant with you and with your brothers and sisters who hold to the testimony of Jesus. Worship God! For it is the Spirit of prophecy who bears testimony to Jesus.’” 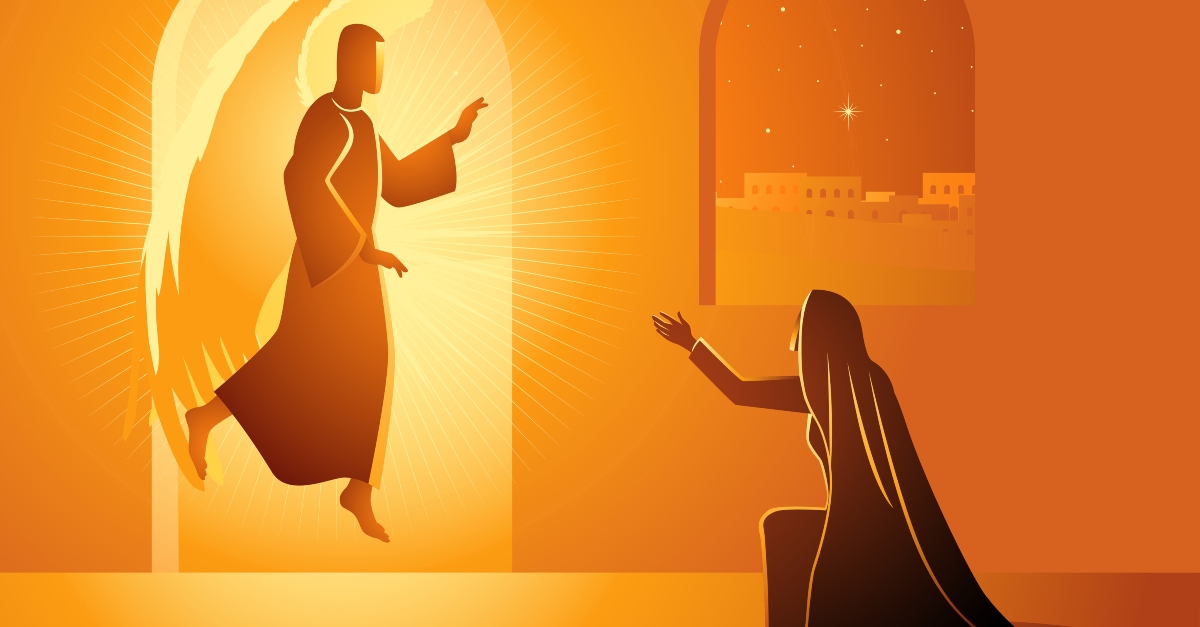 Do Angels Have Wings?

Many verses describe angels as having wings, such as Isaiah 6:1-3, which describes the calling of Isaiah. “In the year that King Uzziah died, I saw the Lord, high and exalted, seated on a throne; and the train of his robe filled the temple. Above him were seraphim, each with six wings: With two wings they covered their faces, with two they covered their feet, and with two they were flying. And they were calling to one another: “Holy, holy, holy is the LORD Almighty; the whole earth is full of his glory.”

The angels on the Ark of the Covenant also appear with wings, so it is clear that at least some angels have wings, and appear to us in that way.

Are There Different Types of Angels?

The six-winged angels that appear to Isaiah are described as Seraphim.

The two-winged angels atop the Ark of the Covenant are described as Cherubim.

The Bible also lists Archangels, such as Michael, who are thought to be superior to the others and angelic leaders.

5 Important Angels in the Bible

The archangel Michael appears in Revelation 12:7-8, and is described as a commander of heavenly armies, who defeats Satan once and for all. There is no doubt that Michael is a fierce warrior, and that his angelic armies are at work in our world today.

Gabriel appears in several places the Bible and, most importantly is the angel who brings news of the coming births of John the Baptist (Luke 1:19) and of Jesus (Luke 1:26).

3. The Announcement of Christ’s Birth

These angels appear to shepherds in one of the most beautiful passages of Scripture, Luke 2:8-14:

“And there were shepherds living out in the fields nearby, keeping watch over their flocks at night. An angel of the Lord appeared to them, and the glory of the Lord shone around them, and they were terrified. But the angel said to them, ‘Do not be afraid. I bring you good news that will cause great joy for all the people. Today in the town of David a Savior has been born to you; he is the Messiah, the Lord. This will be a sign to you: You will find a baby wrapped in cloths and lying in a manger.’ Suddenly a great company of the heavenly host appeared with the angel, praising God and saying, ‘Glory to God in the highest heaven, and on earth peace to those on whom his favor rests.’”

The significance is that one angel is suddenly joined by many, all proclaiming the good news of salvation. Again, they appear frightening to the shepherds, yet assure them that there is nothing to fear. 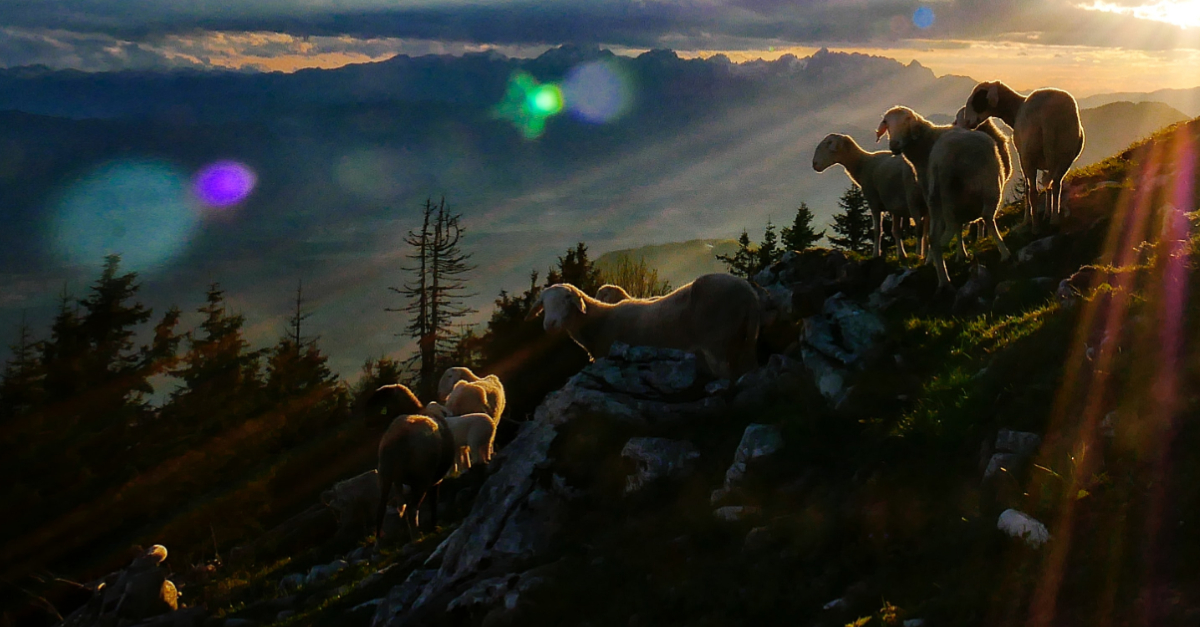 These angels appear in 2 Kings 6:15-17, and are a reminder that God’s servants are invisibly at work among us. In a moment of weakness, Elisha prays that his servant would see that they are surrounded by an angelic army. “And Elisha prayed, ‘Open his eyes, LORD, so that he may see.’ Then the LORD opened the servant’s eyes, and he looked and saw the hills full of horses and chariots of fire all around Elisha.”

What a beautiful reminder that God is always at work among us, even when we don’t see it.

5. The Angel of the Lord

There are several references to “The Angel of the Lord.” Many believe this to be Christ himself acting in the Old Testament, and there is indeed merit to that argument. This angel appears to Shadrach, Meshach and Abednego in the fiery furnace (Daniel 3:24-25), to Gideon (Judges 6:11-12), and Abraham (Genesis 22:15). Whether or not this is Jesus, or a very important heavenly angel, the Angel of the Lord has a uniquely important place throughout the Old Testament.

Although we will never know all there is to know about angels on this side of Heaven, these heavenly beings are active, important servants of God. They are fighting spiritual warfare on our behalf, offering us comfort and hold a special place in the story of Scripture.

Jason Soroski is a homeschool dad and author of A Journey to Bethlehem: Inspiring Thoughts for Christmas and Hope for the New Year. He serves as worship pastor and in Colorado and spends his weekends exploring the Rocky Mountains with his family. Connect on Twitter, Instagram, or at JasonSoroski.net.

This content first appeared on BibleStudyTools.com and is used here with permission. To view the original visit: https://www.biblestudytools.com/bible-study/topical-studies/what-do-we-know-about-angels-in-the-bible.html

The Context of Stillness - Crosswalk the Devotional - October 20