Listen    Podcast
Train Ride
8/11/2022
Whit and Eugene take what they think will be a relaxing train trip from Chicago to Odyssey – and wind up on the tracks of an off-beat mystery.

Featured Offer from Adventures in Odyssey 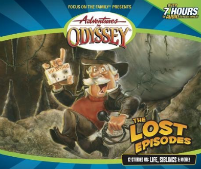 Adventures in Odyssey #00: The Lost Episodes

You've found The Lost Episodes of Adventures in Odyssey Since this fun filled audio drama began, there's been a handful of programs that never found their way into regularly-released albums--until now The Lost Episodesfeatures classic stories from the early days of the show with engaging antics and adventurous frolics as the characters of Odyssey bring biblical principles to life. Featuring the voice talents of Hal Smith, Katie Leigh, Will Ryan, Walker Edmiston, and Dave Madden.

The New Birth and Baptism - In Touch - August 11